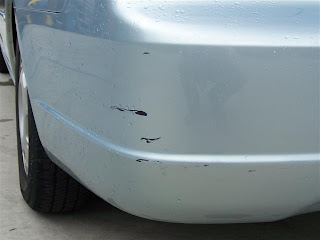 In reasons released by the Supreme Court of BC on December 15, 2010 in De Leon v. Harold, 2010 BCSC 1802, a Plaintiff was awarded $13,200 in damages that resulted from a "low velocity impact".  ICBC's submission that there was not enough damage to the Plaintiff's car for the Plaintiff to have been injured was rejected by Madam Justice Power of the BC Supreme Court.
The Plaintiff, Ms. De Leon, was stopped at a red light when she was rear ended by the Defendant at a low speed.  The damage to the Plaintiff's vehicle was an outline of the Defendant's license plate on her bumper, however, ICBC estimated the cost to repair the mark as zero and refused to repair the bumper ($0.00).
The Plaintiff felt fine at the time of the accident and went to work that night.  Later on that evening she started to experience pain in her lower back and mid back.  At trial, the Plaintiff stated that she experienced pain for a couple of months and would have occasional back pain over the six months following the accident.
ICBC argued at trial that the Plaintiff could not prove that her injuries were caused by the accident.  ICBC pointed to the fact that there was no real damage to the vehicle, the lack of objective symptoms in the medical evidence and no mechanism of injury, the fact that there was some pre-existing back pain, and the fact that the Plaintiff got pregnant shortly after the accident and that the back pain could have been attributable to the pregnancy.
On these issues Madam Justice Power stated in her reasons:

[14]         In Lubick v. Mei [2008] B.C.C.A. No. 777, Macaulay J. stated at paragraph 5:
[5]        The courts have long debunked the suggestion that low impact can be directly correlated with lack of compensable injury. In Gordon v. Palmer [1993] B.C.J. No. 474 (S.C.), Thackeray J. as he then was, made the following comments that are still apposite today.
I do not subscribe to the view that if there is no motor vehicle damage then there is no injury. This is the philosophy that the Insurance Corporation of British Columbia may follow, but it has no application in court. It is not a legal principle of which I am aware and I have not heard it endorsed as a medical principle.
He goes on to point out that the presence and extent of injuries are determined on the evidence, not with “extraneous philosophies that some would impose on the judicial process.”  In particular he noted that there was no evidence to substantiate the defence theory in the case before him. . . .
[15]         In Dao v. Vance 2008 BCSC 1092 Williams J. stated:
[18]      This was undoubtedly a low-velocity collision where damage to the vehicle was so minimal as to be almost non-existent. All of the evidence supports that conclusion. In such instances, claims for compensation for injury are often resisted on the basis that there is reason to doubt their legitimacy. Furthermore, in this case, the principle evidence in support of the plaintiff’s claim is subjective, that is, it is her self report. There is not a great deal of objective evidence to support her description of the injuries she claims to have suffered.
[19]      In response to those concerns, I would observe that there is no principle of law which says that because damage to the vehicle is slight or non-detectable that it must follow that there is no injury. Certainly, as a matter of common sense, where the collision is of slight force, any injury is somewhat likely at least to be less severe than in a situation where the forces are greater, such as to result in significant physical damage to the automobiles. Nevertheless, I do not accept that there can be no injury where there is no physical damage to the vehicles.
In terms of the issue of causation and her ruling on damages, Power J. held:
[18]         In summary, I am guided by the words of Kelleher; J. in Mudry v. Minhas 2010 BCSC 637 paragraph 49:
[49]      Causation does not need to be established with scientific precision. While the plaintiff does not have to show that the motor     vehicle accident was the only cause, she does bear the burden of establishing on the balance of probabilities that it was the cause of her loss.
[19]         I am satisfied that the plaintiff has discharged this burden and that soft-tissue injuries to her neck and back were suffered as the result of the accident. I am satisfied that the injuries were substantially resolved within two months of the accident as the result of the plaintiff’s active efforts in the first two months to attend chiropractic and massage therapy and that the injury was almost completely resolved within six months.
...
[22]         Having regard to the fact that each award must be based on the unique circumstances of the case, and that the plaintiff’s stoicism is a factor that should not penalize the plaintiff (Giang v. Clayton 2005 B.C.J 163 2005, (B.C.C.A.)), I am of the view that an appropriate award for the plaintiff’s non-pecuniary damages in this case is $12,000. The plaintiff will be awarded $1,200 for four days of lost work as the agreed-to amount of the parties for special damages.

posted by Collette Parsons at 4:11 PM